Inspired by the Sundial Coverlet

Let me tell you a story?  It all began a very long time ago when I saw this picture in a book - 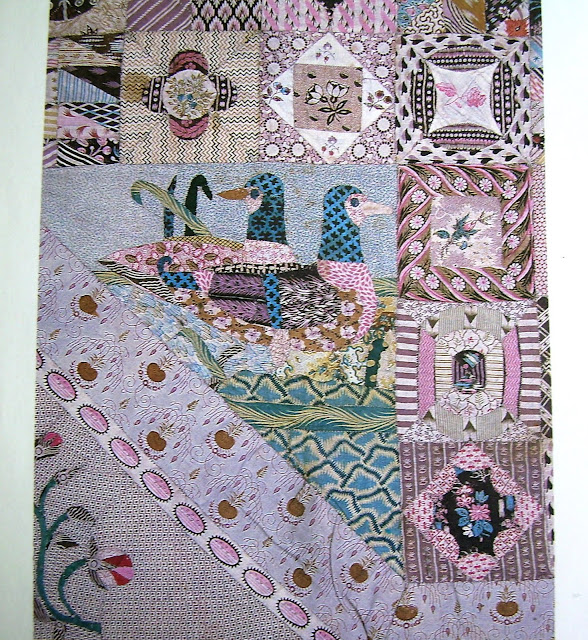 The book was called "A  practical guide to patchwork from the Victoria and Albert Museum", now out of print of course, but you can buy it on Amazon UK for 1p plus postage!  It has a few patterns of other quilts, but only this one picture of  the Sundial coverlet.  I didn't know much about patchwork when I first read it, but I was instantly taken with the way the maker has used  fabric and thought it very clever.  I also liked the colours and variety of the very pretty geometric dress prints, but combining them with black had saved the colour scheme from being too sweet!

Scroll on many years, by now I was teaching patchwork, quilting and embroidery and had just written my first book "House and Garden Samplers",  I had made a special sampler for the cover and chose to depict a  pink cottage orne because it was a house style that I had always admired. 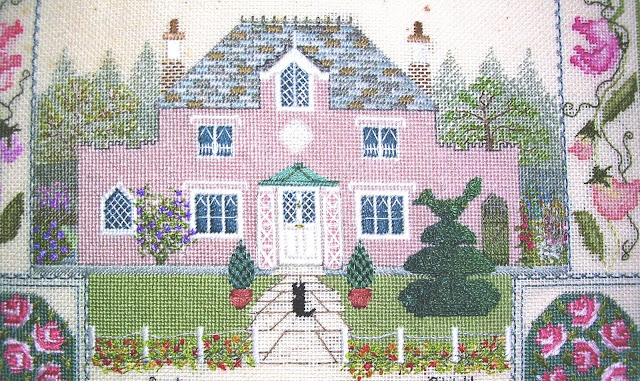 Then, because I was teaching courses on patchwork houses,  I made a patchwork version (see header picture above) intending to extend it into a sampler quilt.  It didn't happen!

Last year in the Quilt Exhibition at the V&A Museum, I saw the Sundial Coverlet for the first time.  It lived up to all my expectations and I decided that now was the time to do something based on it.  I had a file of pictures and collected writings, I also had lots of fabric, so it was time to stop faffing about and get down to it.  I didn't want to do a replica because, though I love the original I wanted it to be my own design.  I decided to put my languishing pink cottage orne block at the centre and surround it with the small blocks from the Sundial Coverlet, to make my personal sampler quilt.

So far, I have found drafting the patterns and piecing them challenging. Some of the designs are simple but others are complicated and were designed to be paper pieced, so I have had to rethink my usual way of working.  It has been the most demanding quilt project I have ever undertaken but stimulating as well.  It is a complete change from my other life in quilting, as it couldn't be more different to making Welsh quilts.

I started this blog because I thought some of you  might be interested in my progress so far but which has a long way to go.  I will be writing regularly so please tune in again..

Posted by Little Welsh Quilts and other traditions at 16:00

What a wonderful project. I will love watching the progress. Pardon my ignorance, but as an American I don't know what the word orne means. Could you please enlighten me? Thanks.

Hi Robin - You are the very first person to leave a comment - very exciting to have it! I will
post about "cottage orne".

This is a fantastic project, I'm looking forward to following this blog very much. Thanks for the link to the V&A - very interesting papers.

What an amazing project to begin.
I am eagerly awaiting your progress!
Best Wishes & Great Success to you!

Oh what a elegant quilt. Thank you sharing it with us. A selfish question, are you posting how to make the blocks also. I am looking forward to see how you create this quilt. And I also will be waiting to know what "cottage orne" means.

I just ordered the book and am getting in the groove to follow your path!

Hi Mary, I'll certainly be tuning in, it's a beutiful quilt and I'll enjoy seeing how yours evolves. Very glad you're going to share your journey with us Thx :-)
Margaret

I look forward to following your journey.
An Australian quilter called Karen Cunningham has made a beautiful reproduction of the Sundial coverlet also - can't seem to find a pic at the moment.

Mary will you be doing patterns so that we can have a go at making our own version? I shall watch your progress with excitement. It will be a beautiful quilt.

Hi Mary! Greetings from Finland! It's so lovely! Thank you very much for letting as to see the photos!

I'llgo out finding fabric and start my own.
Thank you for your fotos.

I was fortunate to attend a Quilt Study conference in 2000 when a paper was presented on this quilt. I've only seen it in photos but it intriques me no end. If I remember, it's a coverler, not quilted, is this correct? Do you plan on quilting it? I look forward to seeing your progress. Indeed, it's a switch from Welsh quilting.

looking forward to seeing those