I usually work at at least three blocks at a time because if I come up against a problem, I can take a break and pick up another.  Of course I have to keep up the cutting out so that I don't come to a complete halt.  Strangely  I find that quite tiring, I suppose it's the most creative bit and saps the brain power.  Rummaging for fabrics takes time too and then of course there's the tidying up! 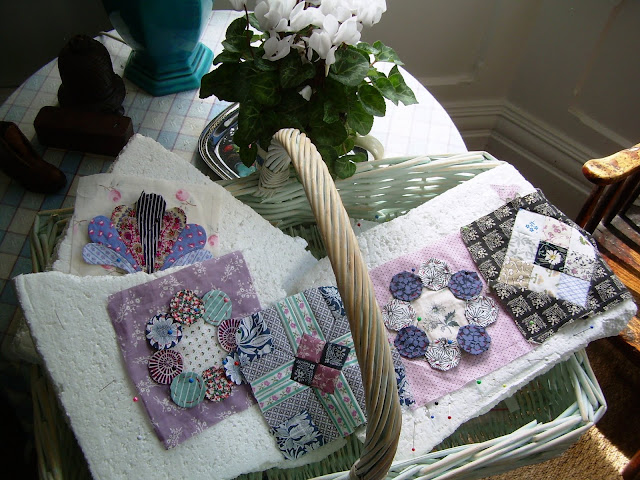 I keep all work in progress, together with their patterns and templates, in this flat basket which I recently bought in my favourite shop. (I'm going to post about this shop on my other blog fairly soon.)  It's really good shape as finding things in it is easy as they can't get buried at the bottom.

I don't have any difficulty with piecing, it's the applique that gives me problems.  I don't really enjoy it and am never pleased with the result and no matter how much I prepare, things seem to end off centre.  I'm having to do a fair amount of it on these blocks because I have only ever paper pieced hexagons and octagons which are fairly straightforward and am certainly not up to the very complicated methods used in the 18th century when pp was used in preference to applique.

I have laid the blocks out on half of my Block Butler - unfortunately I cut it in half because usually my quilts are small but now I could do with the full size.  I did think I would buy another but when I was quoted £48  I thought that was too expensive to contemplate, so I am making do.  I will try attaching the other half somehow because careful placement of the blocks is crucial for a properly balanced design. 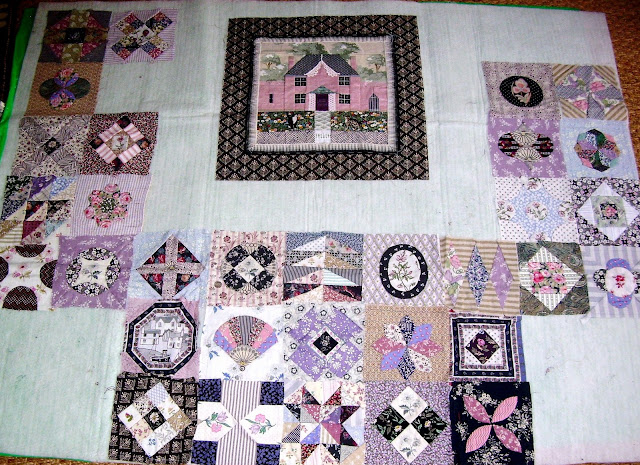 I have a rough plan of the layout of the coverlet which will need about 56 small blocks and 4 large corner blocks, which I have yet to decide upon.  Then of course there are the borders which I will design after I have completed the blocks - so a long way to go!

Posted by Little Welsh Quilts and other traditions at 14:25

Email ThisBlogThis!Share to TwitterShare to FacebookShare to Pinterest
Labels: Two plus three

Hi, Mary,
This is really quite an undertaking! It's going to be smashing! More power to you!
best, nadia

I'm so impressed that you are tackling this project. I've admired your inspiration quilt for a long time. I find it disappointing that there aren't better pictures of it, at least I haven't found any (really good photos that is). I would love to follow your lead and make this quilt along with you but current commitments are already too heavy. I will certainly enjoy watching your progress. Do you have a color recipe for this quilt? It is looking quite wonderful! Happy stitching!

Hi Nyla, There are some good pictures on this blog link -
http://aquiltersjournal.blogspot.com/2010/03/quilts-2010-at-victoria-albert-museum.html