What is a COTTAGE ORNÉ

Maybe I've chosen the wrong title for this blog and my quilt project because most computer keyboards won't add an acute accent and one is needed over the last letter "e".  I managed to get the blog title right by copying and pasting from an already printed document.  I wanted to use the name because a cottage orné is particularly appropriate as a centre for a quilt inspired by one made in 1797, because they were just becoming fashionable at that time.  Here is a drawing of one built in South Devon in 1815 - 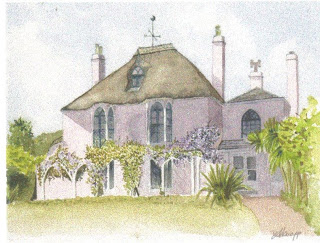 
"Towards the end of the eighteenth century and particularly during the Regency, when fashionable life was becoming more and more artificial, complicated and luxurious, the simple life looked deliciously refreshing to jaded palettes. Never mind that the real life of labourers was often brutal. For the first time in its story, the English house fell victim to inverted snobbery: it became voguish for houses to ape the appearance of dwellings towards the bottom of the social scale, rather than at the top."
In other words they weren't actually cottages but quite substantial houses built by the well-to-do to embrace the rustic life. Many smaller buildings were also built in the style, such as lodges and gate houses and also estate villages, but this was purely to make them look pleasing to the rich folk who owned them.

The style of build was very pretty to look at with curved and pointy arched windows and doors and lots of intricate detailing both inside and out.  It started when Horace Walpole built his house "Strawberry Hill " in Twickenham around 1750 and because it was the first of its kind, the style is known as Strawberry Hill Gothic. Here is the link to Strawberry Hill which will give you plenty to look at as there are some wonderful videos if you really want to absorb the style -
http://www.strawberryhillhouse.org.uk/about.php

This new Gothic style became extremely fashionable among the wealthy and they went to town, even Gothicising their existing houses as well as building new ones such as cottages orné. Then the Prince Regent took it to extreme by building the Brighton Pavilion, which is seriously over the top but wonderful.

Posted by Little Welsh Quilts and other traditions at 12:40

Email ThisBlogThis!Share to TwitterShare to FacebookShare to Pinterest
Labels: What is a cottage orné

Thank you for sharing so much wonderful detail with us. I love to learn about 18th & 19th century history. To learn about the social views of these times is such a treat and really fascinating.

Thank you so much for bringing a little English history to life. I went to the Strawberry Hill site and was amazed at the craftsmanship that was displayed. Your quilt is going to be quite an accomplishment and the title you have picked out is (now that I understand) very appropriate.