Some little Gothic houses in Sidmouth

Last Autumn I visited Sidmouth, a coastal town in South East Devon.  It's attraction for a fan of Gothic architecture is that from the 1780s onwards when this style was all the rage, it became a fashionable place to live. The Napoleonic Wars had closed the Continent to the upper and upper-middle classes, so they had to find somewhere nice to go and many settled in  Sidmouth and built "cottages".  Sidmouth has a shingle beach which doesn't appeal to families with children and the railway didn't reach in until 1874, all of which helped to preserve its character. This is a great bonus for those of us who don't like the usual British seaside attractions!

I have no idea whether the buildings are as lovely to live in as they look, but they are certainly very easy on the eye. It's a delightful town and probably a pleasant place to live, but though  I like the idea of living in a country town or by the sea, I'm used to living in a city, so it's not  for me,  There's no harm  choosing a house though? 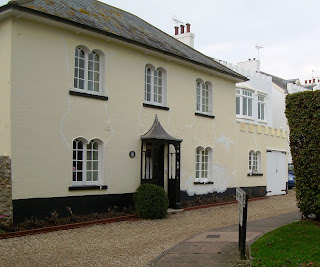 It's a pity about the parked cars and the municipal tennis courts but that's modern life for you!  In the olden days when Sidmouth was being developed these houses would have probably looked out onto a green sward, or maybe gardens, but now we need cars and I suppose tennis courts, so we have to put up with them cluttering up the view!

And here's the one my friend Pauline chose - 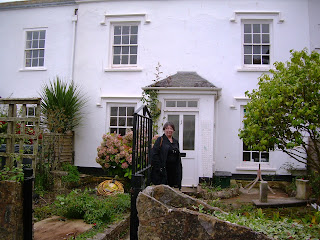 It was being renovated for sale and was behind me when I took the previous photo across the tennis courts, so we wouldn't have been next door neighbours but not too far away!  Pity we don't play tennis!

I was going to talk about a finished block but this post has gone on far too long so I will do it next time. Though progress is slow I am nevertheless working hard!.


Posted by Little Welsh Quilts and other traditions at 15:05

Email ThisBlogThis!Share to TwitterShare to FacebookShare to Pinterest
Labels: Sidmouth

There are Sidmouth Holiday Cottages that has Gothic styles that you might want to stay at in a holiday. It's affordable and very accommodating. Try checking out the link.